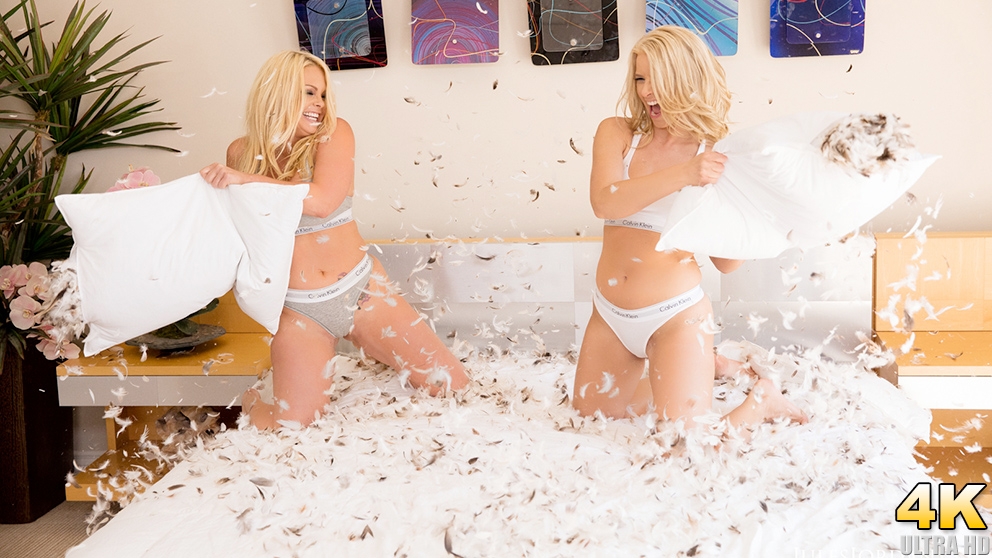 
JulesJordan.com - Jesse & Anikka Albrite Engage In A Hot Pillow-Fight Turned Lesbo Fuckfest! In 4K
02/15/2016
Just imagine you are Anikka Albrite or the sexy Jesse throughout this entire scene. You get to wake up to a crazy hot blonde in some sporty little undies while she puts her hands and mouth all over you?! These two pussy-hungry sluts can't get enough of each other. Normally there's a nice long tease so you can anticipate what's coming but the minute Anikka wakes Jesse up, they can't help but lick and suck each other. Of course, you would do the same, right? Right! This isn't some boring girl girl scene, either. There's plenty of asshole licking and fierce scissor action before the naughty pillow fight even ensues. When the girls go down they get down and those feathers create quite a mess... time for a shower! Once the faucet turns on, Anikka and Jesse do too, again! They get each other so fucking wet that they don't even need the shower head, but it certainly helps. The two go at it, back and forth, slamming each other's hot bodies up against the wall and riding each other's mouths and fingers so hard, you'd swear there was a cock in the mix. That's what you're here for. Give these sluts the load they're working for...
Movie:
Face of An Angel Mind of A Devil
Anikka Albrite, Jesse
Category: 4K, Big Butts, Big Tits, Blondes, Lesbian, Oral, Tattoo

JulesJordan.com - Karmen Karma: All Holes Stretched To The Limit